In an earlier blog I discussed what Dolby Atmos is, and what it is all about. Over the past few weeks I have been exploring more of what Dolby Atmos can do. Here I will share with you a short experimental binaural soundscape I have created.

Dolby Atmos is based upon a 7.1.2 channel bed, with up to 118 additional audio objects which can be positioned within the space. My experimental piece utilizes two audio objects moving around the room. These objects are horror voice and sound effect samples. Each object will be sent to a reverb which will make up the 7.1.2 channel bed of room. The screenshots below show the Pro Tools session: 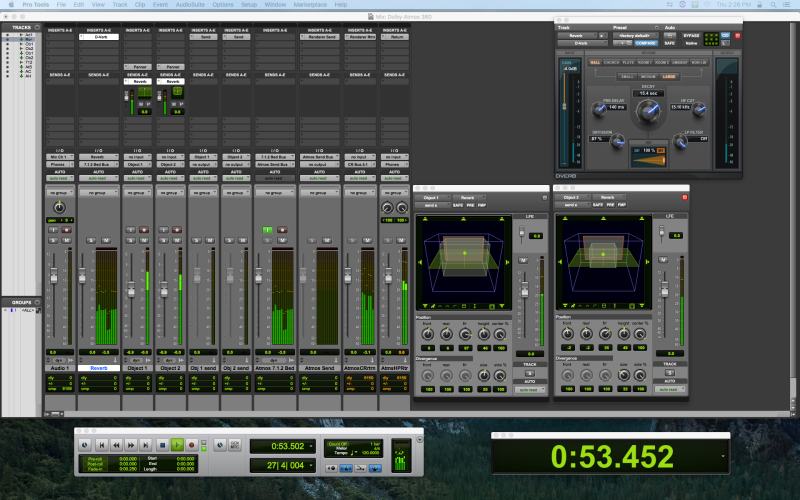 A really useful feature of working with  Dolby Atmos is the ability to easily monitor both binaurally and using the speaker configuration of the studio working from. It is easily configurable within the Dolby Atmos Renderer application. In this case I was monitoring the 7.1.2 in Virtual Reality (VR) mode over headphones, while being able to switch to the 5.1 surround speaker setup of the studio. I was very impressed with how everything sounded through the 5.1 speaker configuration.

If you would like to have a listen to my short piece, put on your headphones and click below.

On 24th and 25th November 2017 I had the great pleasure of recording Ramsbottom Choral Society and Orchestra during their final rehearsal, then concert performance of Handel’s Messiah. Having used surround microphone positioning (Rode NT4, Rode NT2-A, 2 x AKG C214) and the SoundField ST450 microphone, I decided to take a short piece from the recordings to create an ambisonic and binaural mix.

Having decoded the SoundField ST450 recordings to 5.1, I needed to position the other microphones recordings within the mix. I have been using the ambiX ambisonic plugin suite for a while and would like to demonstrate some of its’ uses. The ambiX suite uses convolution of head related transfer function (HRTF) databases and loudspeaker impulse responses (IR) to create ambisonic and 360 audio content. It is also possible to use the ambiX suite with HRTF databases or IR presets created by yourself. This is something I am exploring further, but I need to understand MatLab in more detail. If you are interested in creating your own databases the AES69-2015 standard is a good read.

Using the Binaural Decoder within the ambiX suite, I was able to simulate 12 virtual loudspeakers in a dodecahedron array. The screenshot below shows the pan positions of the five microphones used.

The AmbiX Encoder is a spherical panner. The Rode NT4 was positioned high above the conductor’s head when recording, so I have positioned it with left/right at -/+ 90 degrees azimuth with 60 degrees of elevation to give some stereo height within the mix. The Rode NT2-A mono mic was also high and behind the conductor, so is central with 75 degrees of elevation.  The pair of AKG C214 were stereo room mics and have been positioned accordingly within the mix.

I did experiment with using higher order ambisonics and more virtual loudspeakers (up to 50), however due to the natural room reverb within the open recordings, it causes phase issues during convolution with the impulse responses.

I’ve been aware of the Facebook Spatial Workstation since attending a conference on spatial audio earlier this year. I tried it, but it never really interested me as I haven’t got access to 360 video cameras to create video content. It has since been updated considerably and is now included within the latest version of Avid Pro Tools software, however the HD version is required to use it effectively. I decided to take another look.

For the new exploration into the capabilities of Facebook Spatial Workstation I acquired a free 360 video from here. The video included some sound of the sea which I kept, but I added some birds and an aeroplane. The images below show the positioning of these sounds relative to the video. The sea is fairly obvious, but I positioned the birds above the cliffs. You can also see the pan automation lane for the aeroplane fly over. 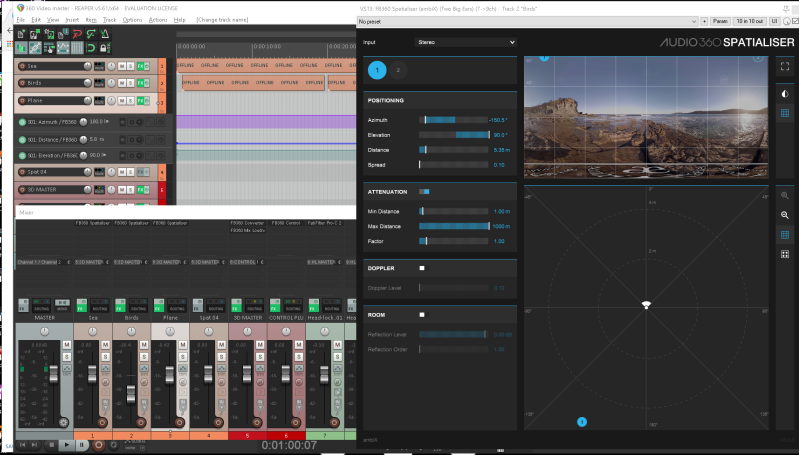 Along with these sound effects I recorded some speech of myself. This would be headlocked as the viewer moves around within the 360 video. To incorporate and encode all these elements was a fairly simple task to undertake. There are clear instructions for full use of Facebook Spatial Workstation available here. An image of the FB360 encoder is shown below. The focus section at the bottom enables overall specification of viewing angle and level reduction.

Having used Facebook Spatial Workstation with more enthusiasm, I feel it can be a very creative tool. The videos can be encoded into a variety of formats depending upon which platform you would like to share the content. Mine was created for Facebook and if you would like to check it out, please see below.

Last week I returned to The University of Salford to commence Semester 2 of the MSc Audio Production course I started in January 2017. After a long summer break I have been eagerly awaiting my return to the course.

As part of my studies over the next few weeks I will be using some new studios and equipment. The University of Salford has installed two new Avid Pro Tools S6 control surfaces into it’s studios at the MediaCityUK campus. Today a short introductory session was arranged with Bernie Steer, to demonstrate the operation of the Avid Pro Tools S6 and the workflows within the Dubbing Theatre.

The Avid Pro Tools S6 control surface is based upon a modular design, which enables it to be fully customizable to the user’s studio requirements. The recent Pro Tools HD 12.8 update, introduced support for Dolby Atmos mixing and audio rendering. The Avid Pro Tools S6 control surface should give deep integration with the software, for parameter control, manipulation and speed of mixing.  A promotional video by Avid,  demonstrating some of the new improvements with the Pro Tools HD 12.8 update with Dolby Atmos support is shown below:

Dolby Atmos is a form of three-dimensional audio, which is designed to give the listener a fully immersive experience. Conventional stereo and surround sound setups (such as 5.1) place the audio around the horizontal speaker positioning, Dolby Atmos uses height and objects to create an audio atmosphere. Audio objects can be placed anywhere around the listening position, to enhance the experience for the listener. Below is a video by Dolby explaining in detail the principles of how Dolby Atmos works:

During this semester of the MSc Audio Production I shall be undertaking some mixing in Dolby Atmos for video and audio projects. I will post further updates as I begin to use the Avid Pro Tools S6 for mixing the projects over the next few weeks.